We’ve all heard of  “quantum computing”, but don’t you wish to understand how they work and what they do? Truth be told, the way they work is very complex, but I will explain them using common examples, so you can get a basic understanding of quantum computing.

To understand how a quantum computer works, we first need to understand how a normal computer works: in a normal computer, we use bits, which are either 0 or 1. These are transmitted through electric impulses, which are really really fast, especially in the CPU. But how does a processor use impulses or bits in order to process information? They are just 0s and 1s! CPUs use logic gates. The processor from your computer is full of these logic gates! The processor inputs 2 bits into a gate. The gate then processes the 2 bits using a rule, which depends on the type of gate. It then outputs a single bit.

There are 2 types of (basic) logic gates:

There are no bits in a quantum computer, only qubits. These are not very different from normal computer bits. A qubit is not transmitted using electric impulses, they use electrons to store information. This may seem like a hard concept, but it’s not: If the electron does not exert any energy, and remains parallel to the magnetic field, it stores the value 0. If it exerts energy and it’s rotation is opposite to the magnetic field, it will store the value 1. Here’s a simple example using a kitchen timer so you can understand this concept: Let’s say the above image of a kitchen timer is our electron or qubit. This shows the value 0 because it hasn’t been wound up yet. This “electron” stores the value 0. If we wind up the timer up to 30 seconds, we have applied a force to it, and it’s rotation is now opposite to the one where it showed the value 0. This electron now shows the value 30, therefore it is opposite to the magnetic filed, storing the value 1. So a qubit can either be 1 or 0, just like a normal bit, but it can also be something else.

Things will get a little more complicated here: As I said earlier, a qubit can be either 0 or 1, but it can also be something else: 0 and 1 in the same time! A qubit (electron) can enter a superposition: The electron starts rotating on the x and y axis. When the electron was in a continuous rotation, there was no way to tell if it was 0 or 1, because it wasn’t either of them. 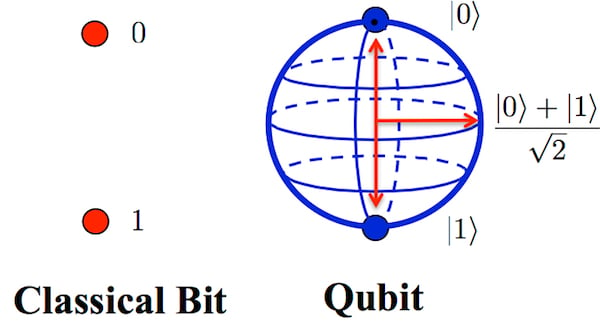 When you read a qubit which is in a superposition, it will round it up. If the rotation axis is closer to the electron’s value of 1, it will be read as 1. The same goes for 0. This means that if you read a qubit in a superposition, there will be a 50% chance of it being 1, and 50% chance of it being 0. IBM have a research program where they allow anyone to make simple tests on quantum computers. You can check it out here. Using this tool, I introduced a qubit in a superposition and then read it. These were the results after 20 tries:

As we can see, there is an approximate 50/50 chance of the qubit being 1 or 0. They are not exactly 50/50 because the electron is rotating chaotically, therefore we cannot predict it, just in case of quantum entanglement, which is a much more complex phenomenon which makes qubits depend on each other. Because it is so complex, I will not describe it in this article.

We now understand how quantum computers work, but how in the world can they be more useful or faster than normal computers? Qubits are limited by the number of electrons and they lose all information whenever they enter a superposition. But how could we use such a computer? The answer is computations, like cracking encrypted passwords. Let’s assume that we have the set of bits 1101, and after encrypting them, they become abc.

Now, we have the data abc and want to decrypt them back into 1101. A normal computer would use the encryption algorithm to encrypt every value possible (0000, 0001, 0010, 0011, 0100, 0101, 0110, 0111, 1000, 1001, 1010, 1011, 1100, 1101, 1110 or 1111) and then would check the encrypted values against the data, abc. When the computer will encrypt 1101, it will get abc, therefore it will know that the data abc decrypted is 1101. The problem is, that when encrypting each set of bits, the operation will take a small amount of time. In this example, that amount of time will be insignificant, but when we get to stronger encrypted passwords like h557GGrtyy4 instead of abc, the decrypting process would take a lot of time. This is the reason for which some passwords would take years to be cracked even with supercomputers. Here is where quantum computing comes in: If a set of 4 qubits can be both 0 and 1 in the same time, it will process ALL of the passwords in the same time, so instead of taking (for example) 16 seconds, it would take only 1 second. Quantum computers become more efficient with the more qubits they have.